To the north-east of Jao Camp, in private concession (called the Jao Reserve) outside the Moremi Game Reserve 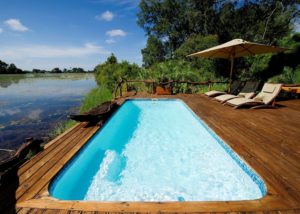 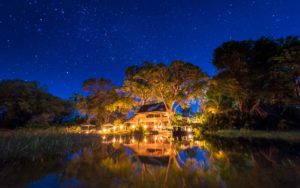 Situated about 25 kilometres west of Mombo, outside the Moremi Game Reserve on the Jao flats, Jacana Camp is a truly water-oriented camp and offers mokoro and walking safaris all year round.

From about September to May, as the floodwaters recede, game drives and night drives in open 4 x 4 vehicles are available – depending on water levels. The camp is set in one of the most densely populated wetland areas for Sitatunga and Red Lechwe – but game concentrations depend on water flow and volume and change from season to season.

All the big game can be found in the area – Elephant, Lion, Leopard and Buffalo. Pels Fishing Owl is a favourite amongst birders, as well as greater and lesser Jacanas. Jacana Camp has five meru-style tents. Each tent is built on a wooden deck overlooking the floodplains and has an en-suite bathroom with flush toilet and shower.

The bathroom is enclosed, but roofless. The main dining area is on an elevated wooden deck between two magnificent sycamore fig trees and surrounded by dense wild date palms. Downstairs, there is a cosy pub and lounge, with an area to sit around an open fire under the stars..

The camp is set in the most densely populated wetland area for Sitatunga antelope and Red Lechwe. Hippos and crocodiles are regularly sited. In the dry season lechwe, tsessebe, elephant, wildebeest and zebra occur here, and lions, cheetah and leopard are often sited on the floodplains. This is an area of prime importance for a host of wetland bird species, including Wattled Cranes, Pel’s Fishing Owls, both species of Jacanas as well as other seldom sighted species such as Rails, Crakes and Moorhens.

The Jao Reserve (Wildlife Management Area NG25) is 60 000 hectares in extent and is in the north-western area of the Okavango Delta below the panhandle. The Moremi Game Reserve forms the eastern boundary of the reserve.

Lying as it does in the very heart of the Delta, the Jao Reserve embodies all the magic and mystique of the Okavango. Narrow water channels cut their way through the papyrus and reed beds in the permanent delta to the north and east of the reserve, providing the perfect environment for the elusive sitatunga and the rare Pel’s Fishing Owl. Beautiful lush palm islands dot the water, begging to be explored, and Jacana Camp is built on one such lush and thickly forested island. In the central region of the reserve, vast open floodplains provide some of the most stunning scenery of the region. Jao Camp lies in the southern side of the plains and Kwetsani Camp is 5 miles further north on the same floodplain system. This area of the reserve has beautiful islands fringed with riverine forests. Further west the reserve gets progressively dryer and Hunda island which is the tip of a large sand tongue is the largest area of dry land during the flood season. Hunda island has sandveld vegetation supporting many species of nutritious acacia and grewia shrubs which provide excellent browsing. Tubu Tree Camp is built on the western side of Hunda island.

Jao and Kwetsani Camps are situated on islands with breathtaking scenery and have a great diversity of activities on offer. The largest concentrations of endangered Wattled Crane are found in this area. The birdlife is simply stunning: Slaty Egrets, Pink-throated Longclaws and African Skimmers are some of the specials that can be seen. The lion prides in this area have been studied for the past 5 years by our resident guide, Grant, and a good record has been built up allowing us more intimate knowledge of their behaviour. Jacana is a traditional Delta water camp, built on a small exquisite wooded palm island. Tubu Tree Camp is situated in the area with the most palatable grasses and the largest area of permanently dry land and so usually has the more abundant game viewing experience. There are two platform hides in the Reserve.

Only 48 beds are developed in 4 camps in the entire remote reserve, ensuring an exclusive and personal wilderness experience. The majority of the staff in the camps are locals from the area, either BaYei tribesman or MaXaniqwe (River Bushmen) and know the area like the back of their hands. Many of these people were born on islands nearby and have an intimate knowledge and passion for the area which is hard to beat. They take great joy in imparting their local knowledge and culture to our visitors and love sharing their singing and dancing with guests. Many of our guests rate their interactions with the staff as the most enjoyable element of their stay.

Although this Wildlife Management Area is a hunting concession, a moratorium has been declared on hunting. Every year we reserve our quota, so that those animals cannot be re-allocated to another area and are thus saved from being hunted. We believe that with the same level of protection that the Moremi Game Reserve has enjoyed over the past 40 years, the Jao Reserve has the potential as a wildlife area equal to that of the Moremi.