West of Mombo and North of Jao, in private concession called the Jao reserve, bordering the Moremi Game Reserve.

8 Luxury tree-house, canvas, cottages over 3 meters off the ground 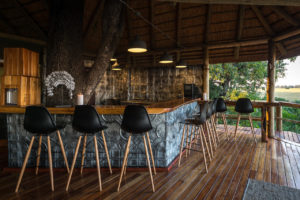 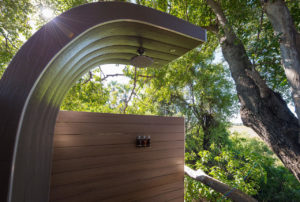 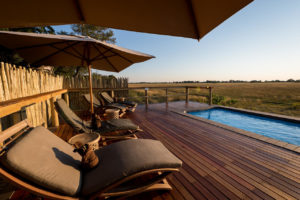 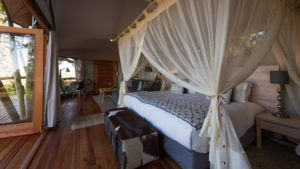 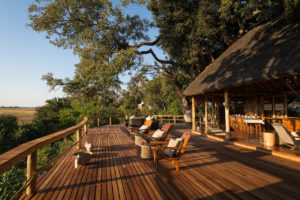 Kwetsani Camp is a five roomed luxury tented camp located in a private reserve 25km to the west of Mombo and to the west of the Moremi Game Reserve. The large elongated island on which Kwetsani is built is heavily wooded, cool and shady with Palm, Mangosteen and Fig trees and is one of the most remote camps in the entire Okavango Delta.

Kwetsani Camp is raised on stilts beneath a shady canopy. Five wonderful, spacious tree-house, canvas, chalets are built under thatch roofs, with wood, glass and a little canvas. All have en-suite facilities including a shower, flush toilet, twin basins and an additional outdoor shower for those who like showering in the open air. The camp overlooks an enormous floodplain dotted with Lechwe and Wildebeest. Guests can lie in their rooms, or in the pool, and watch the animals in front of the camp. All the Okavango’s large predators are found here.

Activities include mokoro trails, walking on palm-fringed islands and game drives during the day and night. Due to high flood water levels, the night drives are currently restricted to an hour’s drive around the camp island. In the height of the Okavango’s annual floods, boats are used to get around the area and also to transfer to the islands where the game viewing vehicles are located. Lion, Leopard, Cheetah, Wild Dog, Buffalo and Elephant are all found in this area, as well as good concentrations of Zebra, Wildebeest, Giraffe, and all the plains game.

Access into this area is only by aircraft (depending on the Okavango’s flood levels, either Jao or Hunda airstrip is used for access to this camp).

Hippo, Sitatunga antelope and Crocodile reside in the deeper permanent lily-filled lagoons of the area. Lion, Leopard, Wild Dog, Cheetah, Tsessebe and Lechwe are among the major game attractions at Kwetsani. Nocturnal animals such as Porcupine, Aardwolf, Serval, Genet and Bushbaby can be observed on the night drives (water levels permitting).

During the flood from April to Sept. Lechwe are plentiful and Lion follow them. Elephant numbers peak in Aug – Nov. Plains game is evident and there are good Leopard sightings. Hunda Island offers a wide variety of different animals and is a must at least once if accessible. Birdlife is excellent – especially during the summer months.

The Jao Reserve (Wildlife Management Area NG25) is 60 000 hectares in extent and is in the north-western area of the Okavango Delta below the panhandle. The Moremi Game Reserve forms the eastern boundary of the reserve.

Lying as it does in the very heart of the Delta, the Jao Reserve embodies all the magic and mystique of the Okavango. Narrow water channels cut their way through the papyrus and reed beds in the permanent delta to the north and east of the reserve, providing the perfect environment for the elusive sitatunga and the rare Pel’s Fishing Owl. Beautiful lush palm islands dot the water, begging to be explored, and Jacana Camp is built on one such lush and thickly forested island. In the central region of the reserve, vast open floodplains provide some of the most stunning scenery of the region. Jao Camp lies in the southern side of the plains and Kwetsani Camp is 5 miles further north on the same floodplain system. This area of the reserve has beautiful islands fringed with riverine forests. Further west the reserve gets progressively dryer and Hunda island which is the tip of a large sand tongue is the largest area of dry land during the flood season. Hunda island has sandveld vegetation supporting many species of nutritious acacia and grewia shrubs which provide excellent browsing. Tubu Tree Camp is built on the western side of Hunda island.

Jao and Kwetsani Camps are situated on islands with breathtaking scenery and have a great diversity of activities on offer. The largest concentrations of endangered Wattled Crane are found in this area. The birdlife is simply stunning: Slaty Egrets, Pink-throated Longclaws and African Skimmers are some of the specials that can be seen. The lion prides in this area have been studied for the past 5 years by our resident guide, Grant, and a good record has been built up allowing us more intimate knowledge of their behaviour. Jacana is a traditional Delta water camp, built on a small exquisite wooded palm island. Tubu Tree Camp is situated in the area with the most palatable grasses and the largest area of permanently dry land and so usually has the more abundant game viewing experience. There are two platform hides in the Reserve.

Only 48 beds are developed in 4 camps in the entire remote reserve, ensuring an exclusive and personal wilderness experience. The majority of the staff in the camps are locals from the area, either BaYei tribesman or MaXaniqwe (River Bushmen) and know the area like the back of their hands. Many of these people were born on islands nearby and have an intimate knowledge and passion for the area which is hard to beat. They take great joy in imparting their local knowledge and culture to our visitors and love sharing their singing and dancing with guests. Many of our guests rate their interactions with the staff as the most enjoyable element of their stay.

Although this Wildlife Management Area is a hunting concession, a moratorium has been declared on hunting. Every year we reserve our quota, so that those animals cannot be re-allocated to another area and are thus saved from being hunted. We believe that with the same level of protection that the Moremi Game Reserve has enjoyed over the past 40 years, the Jao Reserve has the potential as a wildlife area equal to that of the Moremi.

Below is only a suggestion as to what may happen in camp – as daily wildlife sightings tend to throw the schedule right out of schedule.

05h00/06h00 – Wake up call. Light continental breakfast consisting of cereals, tea/coffee/juices and pastries to be served in the dining area.

10h00/11h00 – Brunch will be served, this will consist of a selection of breakfast and lunch dishes. From now until afternoon tea, guests will be at leisure.

16h00/15h00 – Afternoon tea will be served – this will consist of a selection of sweet and savoury snacks.

16h30/15h00 – Depart on afternoon game viewing activity – drinks and snacks will be served for sundowners during the course of the activity.

20h30/20h00 – Three course dinner – generally speaking the starter and desert is served, whilst the main course is buffet style.