2 man Canvas Dome Tents under the comfort of shady trees 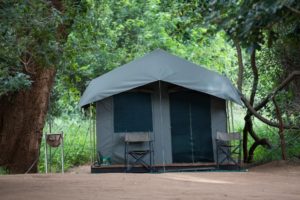 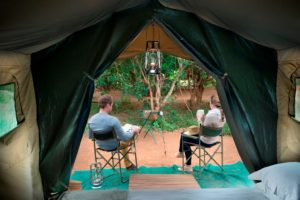 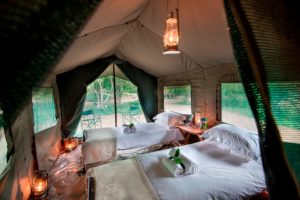 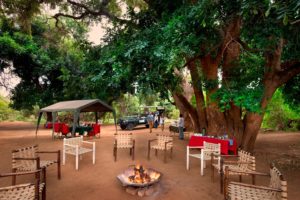 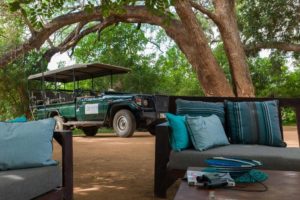 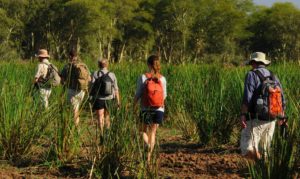 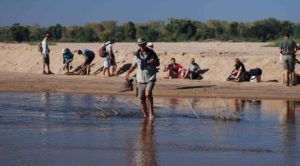 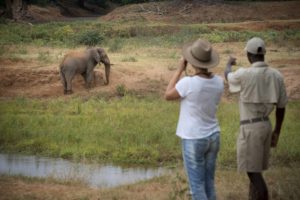 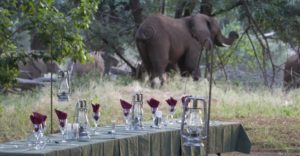 GENERALLY THE PAFURI WALKING TRAILS RUN FROM 01 APRIL – 31 OCTOBER EACH YEAR (SUBJECT TO CHANGE)
WALKING TRAILS ARE BASED ON A MINIMUM 2 NIGHT STAY
MINIMUM 2 & MAXIMUM 8 EXPLORERS PER TRAIL.

The Pafuri (Makuleke) Concession is perhaps the best area for walking in the entire Kruger National Park. It is blessed with exceptional biodiversity, spectacular scenery, seasonally high densities of many large mammal species, a feeling of wilderness and remoteness, and a sense of deep history. The 24 000 hectare area is sandwiched between the life giving arteries of the Limpopo and Luvuvhu Rivers, both with well developed floodplains and a series of vitally important seasonal pans. Between the floodplains lies a ridge of hills with a network of drainage lines and secret perennial springs to which the area’s game is drawn. Rugged baobab dotted kopjes jut from mopane woodland providing endless vistas across palm-studded floodplains, acacia woodland and ethereal riverine forest.

Undoubtedly the best way to experience the biological wealth of the area and its timeless wilderness is on foot. Safari And Adventure Company is proud to offer a limited number of trails that will allow up to 8 trailists at a time access to this most valued of Kruger’s assets.

The entire safari is guided and hosted by professional, experienced and passionate guides. The guide will be accompanied by a skilled back-up trails guide and between them they will share their in-depth knowledge of the region and it’s ecosystem with the guests.

Accommodation is in walk-in canvas dome tents ensuring that guests are intimately connected with the surrounding wilderness. The trails camp will have two bucket type hot water showers, and en-suite chemical toilets are provided, attached to each guest tent. The site of the camp is the same each night, with trailists walking in different directions from the camp each day, dependent on local conditions.

The Pafuri area is one of the few true wilderness areas left in South Africa. Large herds of elephant occupy the area during the dry season while several herds of buffalo are resident. There are resident prides of lion and the Luvuvhu riparian system supports a healthy population of leopard. A small white rhino population also exists. The area is well-known for its strong nyala and eland population however as well as other regional specials like four-toed elephant shrew, Sharpe’s grysbok and even a small herd of sable. On the easternmost boundary at “Crooks Corner” the Luvuvhu supports a large population of hippo and crocodile. The concession is widely regarded as one of the best birding areas in South Africa with specialties such as Pel’s Fishing Owl, Black-throated Wattle-Eye, Three-banded Courser, Racket-Tailed Roller and Dickinson’s Kestrel seen regularly.

Trails generally operate between 1 April and 31 October each year.

All guests need to check in at Pafuri Camp by 14h00, where they will meet their guide and enjoy lunch before going through a thorough safety briefing. The trails group will depart by road and/or on foot to the trails camp.

Upon arriving at our trails camp guests will have time for a hot shower and some drinks before the evening’s meal is prepared on an open fire. After dinner we relax around the fire before retiring to bed with the sounds of the African night.

We are woken early by the sounds of the dawn chorus and after a light snack, coffee and rusks; we depart shortly after first light for a morning walk. Carrying only our snacks and water in our day packs and returning to camp for lunch. After a siesta we head out on either a short afternoon walk or drive. The directions of the walks and/ or drives will depend on local animal activity before returning to camp in the evening to enjoy warm showers, ice cold drinks and dinner.

This area is certainly the wildest and most remote part of the Park and offers varied vegetation, great game viewing, the best birding in all of the Kruger, and is filled with folklore of the early explorers and ancient civilisations. It is well known for its fever tree forests, beautiful gorges and Crook’s Corner, where the Limpopo and Luvuvhu rivers and three countries, Zimbabwe, South Africa and Mozambique, meet. The region is considered one of Kruger’s biodiversity hotspots, with some of the largest herds of elephant and buffalo, leopard and lion and incredibly prolific birdlife.

Camp sites are located in varying landscapes, revealing the beauty and diversity of the Pafuri region’s ever changing geography.