In North Botswana, within the Linyanti concession, along Savuti Channel, 17kms from its source

7 Luxury Tents, raised off the ground on wooden decks 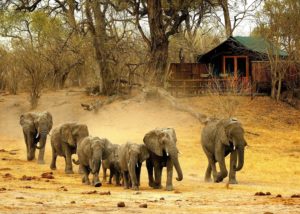 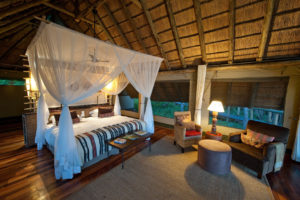 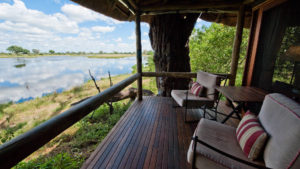 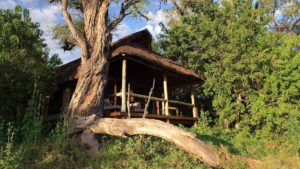 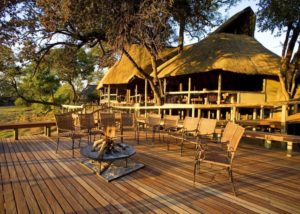 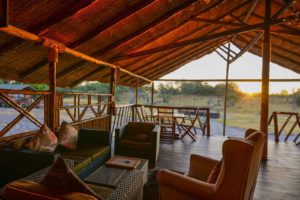 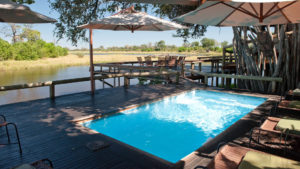 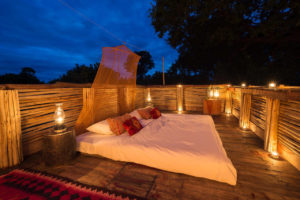 Savuti Camp is situated in the Linyanti Reserve along the Savuti Channel in northern Botswana. The camp is built about 17 kilometres “downstream” from the source of the Savuti. The channel stopped flowing in 1980 and what was a Hippo-filled river, is now wide, open grasslands. Savuti Camp is a comfortable camp providing accommodation in 7 large walk-in tented rooms with en-suite facilities. Five of the bathrooms are within the tents and two tents have bathrooms with wonderful open fronts facing onto the Savuti Channel.

Each room is raised off the ground on wooden decks. The camp has a thatched dining area, pub and plunge pool, all on raised wooden decks. There is a waterhole close to camp and this attracts large numbers of animals that guests can view from the camp.

Activities include game drives in open 4×4 Land Rovers, hides, night drives and walks with an armed guard. Game in the area includes all of Botswana’s big game, and is one of the best areas in the country to see predators.

There are also good concentrations of plains game in the area.

Game concentrations here are high, especially in our winter months. Besides your normal plains game, the area has good concentrations of Roan, Sable and Giraffe. All the predators occur in the area – Lion, Leopard, Cheetah and Wild Dog. We have already identified 40 different Lion along the channel around the camp. The Chobe/Linyanti area is renowned for its dense Elephant population and for some of the best Elephant viewing anywhere in Africa in the winter months.

As the waterhole in front of the camp is the only supply of water for a large area in the dry winter months, one of the highlights for Savuti Camp is the fantastic wildlife viewing directly from the camp. Hides at other waterholes are also a special feature.

All times are a guide only. Times can and do change depending on local conditions

05h00/06h00 – Wake up call. Light continental breakfast consisting of cereals, tea/coffee/juices and pastries to be served in the dining area.

10h00/11h00 – Brunch will be served, this will consist of a selection of breakfast and lunch dishes. From now until afternoon tea, guests will be at leisure.

16h00/15h00 – Afternoon tea will be served – this will consist of a selection of sweet and savoury snacks.

16h30/15h00 – Depart on afternoon game viewing activity – drinks and snacks will be served for sundowners during the course of the activity.

20h30/20h00 – Three course dinner – generally speaking the starter and desert is served, whilst the main course is buffet style.

The Linyanti Wildlife Reserve offers one of Africa’s most exhilarating wildlife experiences. The area covers 125,000 hectares (about 275,000 acres) of prime wildlife country situated between the Okavango and Chobe regions. Yet, there are only 26 rooms in 3 small camps that are allowed to access the game drive areas of this reserve. To put this into perspective, the Linyanti Wildlife Reserve is just about double the size of the Sabi Sands Reserve in South Africa. The Sabi Sand Reserve successfully houses over a thousand beds in world famous lodges like Singita, Londolozi, Mala Mala, Sabi Sabi and many others. Space and privacy are what sets this reserve aside – as well as its brilliant wildlife concentrations.

Elephants are one of the reserves prime attractions – especially in our winter months when they are forced to congregate along the waterways and around the waterholes of the area when the rainfall filled depressions and pans of the interior dry up. At times the reserve must have several thousand elephants roaming around. Red Lechwe, Zebra, Wildebeest, Impala, Waterbuck, Sable, Roan, Eland, Giraffe, Baboon, Monkey, Warthog, Crocodile and Buffalo are some of the other animals to be found here. Then there are the predators ~ Lion, Leopard, Cheetah, Wild Dog and Hyena ~ and the nocturnal animals ~ Bushbabies, Spring Hare, Aardwolf, Serval, Genet, Pangolin ~ and the smaller predators. Birding is great here ~ from the Okavango “specials”, such as Slaty Egret, Whiterumped Babblers and Wattled Cranes, to the bushveld species.