5.5 hours drive from Johannesburg. Scheduled flights into KMIA (Nelspruit), followed by a road transfer of approximately 2 hours to the Lodge. 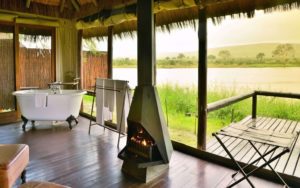 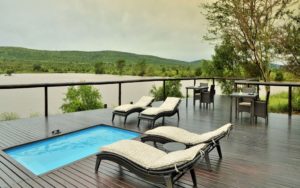 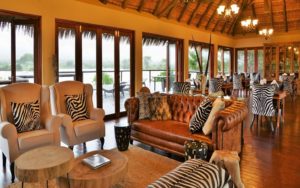 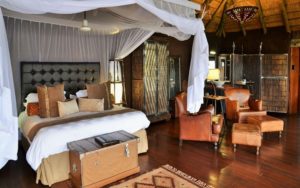 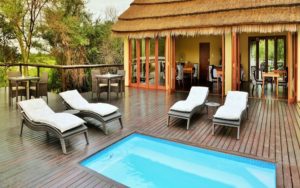 The Kruger National Park in South Africa is two million or so hectares of unparalleled diversity of plant and animal life. It is also home to a variety of stylish and luxurious camps and accommodation options. One such camp is Camp Shawu, named after the most famous of South African elephants – the Shawu bull. He roamed the striking valley for more than 60 years and with his long tusk and striking beauty, those who were lucky enough to catch a glimpse of him were left simply awe-struck. This is what Camp Shawu aims to do: leave guests impressed and in awe.

Each of the five large, luxurious rooms have a distinct African flavour and are equipped with everything guests may desire during their stay. The Buffalo dung walls bring a real sense of authenticity to the camp and help to capture the true, and often elusive, spirit of Africa. The rooms come complete with outdoor showers and expansive verandas that provide the perfect setting to enjoy an exquisite African sunset. The private decks have glorious views of the Mpanamana Dam and guests can sit back and relax, all the while watching the game that comes down to drink at the waterside. Sightings of the mighty “Big Five” are almost always guaranteed and avid bird-watchers are in for a treat with hundreds of bird species making the area their home. A team of dedicated therapists are also on hand to ensure that it’s not only your mind that gets put at ease, but your body too. The healing energy of the area is present for every treatment so you’re sure to be left feeling re-energised and reinvigorated, as only the African bush can ensure.

From Johannesburg:
Take the N12/N4 highway to Nelspruit

From Hazyview:
Take the R 538 to Nelspruit

From Tzaneen:
Take the R 40 to Nelspruit