5.5 hours drive from Johannesburg
Scheduled flights into KMIA (Nelspruit), followed by a road transfer of approximately 2 hours to the Lodge. 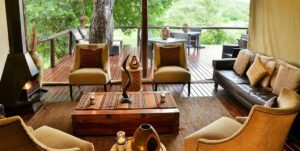 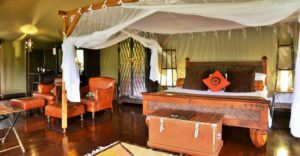 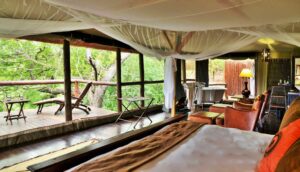 Shishangeni Private Game Lodge comprises three different camps, one of which is the gorgeous Camp Shonga. Located in the heart of the world renowned Kruger National Park, this intimate and luxurious bush retreat delivers a unqiue and wonderful bush experience. Five luxury safari tents accommodate a maximum of ten guests at a time, promising the most intimate of bush getaways. Visitors are treated to quality service, prime game viewing and an experience of nature unlike any other. The area is abound with a variety of animals, birds and flora and staying at Camp Shonga means getting a taste of the African wilds in their purest form.

Nestled on the foothills of the Lebombo Mountains, Camp Shonga is an example of being able to connect with nature without having to sacrifice luxury. The camp is dedicated to ensuring that all guests experience an unfiltered Africa in all its glory, and what better way to do this than through thrilling game drives. The experienced guides who lead the safaris are more than happy to share their knowledge of the bush and it’s wildlife with everyone, something that only adds to the already extraordinary game drive experience. After incredible bush encounters, guests can cool off in the sparkling splash pool or laze around in the breezy open lounge area. Evenings are filled with noises of the wild as well as delicious meals and roaring boma fires enjoyed under a starry African sky. Camp Shonga is where the spirit of Africa meets unadulterated luxury.

The best time for observing the animals is the dry winter season. Then the grass is low and bushes and trees don’t have leaves, so that one can have an unobstructed view. Because it virtually doesn’t rain in winter, the animals come to the waterholes to drink in the mornings and evenings and can easily be watched from the car