2.5 hour drive from Johannesburg to the Main Gate of the Welgevonden Game Reserve 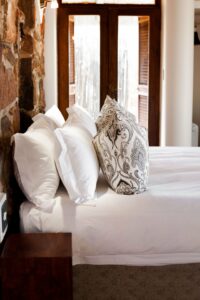 Situated in the heart of the malaria-free Welgevonden Private Game Reserve, Ekuthuleni Lodge invites you to savour true African luxury. Ekuthuleni Lodge, meaning “place of peace”, has sweeping views of the Savannah plains, and is home to the Big Five and many other species of game. Watch the morning sun scribble intriguing patterns across the veld. Enjoy a scrumptious breakfast in anticipation of the days’ excursions.

View game rich plains through the foliage of majestic Seringa trees. Each of intimate chalets offer intimacy and privacy with, magnificent views of the grasslands, giving a whole new meaning to nature on your doorstep. The romantic bathrooms have both indoor and outdoor showers.

Every care is taken to ensure that your stay is uninterrupted by the demands of the outside world.Guests may experience a rich bird life, a variety of fascinating trees and plants, an abundance of other wildlife, as well as the Big 5