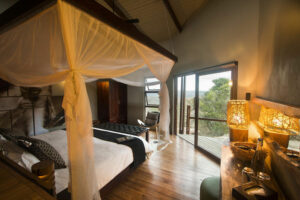 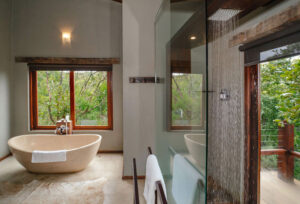 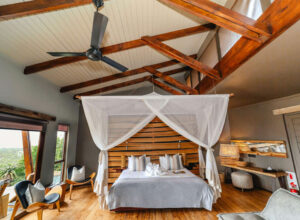 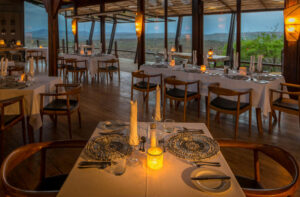 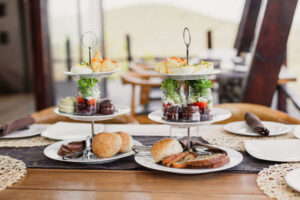 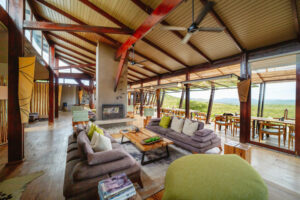 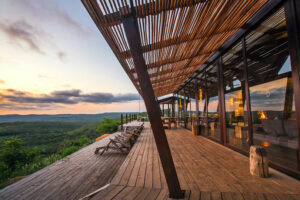 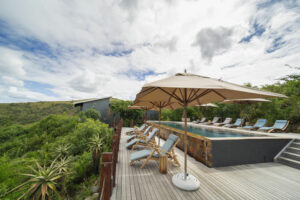 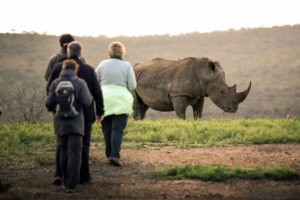 Rhino Ridge Safari Lodge is situated on the western boundary in the first private concession within Africa’s oldest proclaimed Game Reserve Hluhluwe iMfolozi Park, Northern KwaZulu Natal, South Africa.  Set in a 96 000 hectare park Rhino Ridge Safari Lodge enables guests to enjoy 4 star luxury at a private lodge for the first time within the park, offering spectacular scenery and excellent safari opportunities within the heart of Big 5 territory. Rhino Ridge Safari Lodge accommodates a maximum of 44 guests in 3 different room types. The rooms have been carefully positioned high up on a ridge to take full advantage of the spectacular views over the hills and valleys of Hluhluwe iMfolozi Park while at the same time giving each room maximum privacy. This has resulted in some of the rooms being quite a distance from the central lodge facility with some of them being a 200 metre walk to the main lodge area.

6 Safari Rooms comprising 2 twin/king bedrooms both en-suite. Rooms are arranged in pairs leading off a common lobby ideal for families or couples travelling together.

Hluhluwe iMfolozi Park the oldest game reserve in Africa established in 1895 was originally the hunting grounds of the Royal Zulu Family. The famous King Dingiswayo and Shaka put in place the first conservation laws here. As the home of Operation Rhino in the 1950’s & 60’s the park became famous for its highly successful white rhino conservation. The park now has the largest population of white rhino in the world. The park is also famed for its wilderness hiking trails and its Game Capture unit which has become an international bench make for animal capture and sustainable utilization throughout Africa. The Park covers 96 000ha offering an immense diversity of flora and fauna. Hluhluwe in the northern section is characterised by undulating hills and valleys. This section of the park is noted for its wide variety of birds and animals. The park is home to Africa’s big five game: elephant, rhinoceros (black & white), Cape buffalo, lion and leopard. It is home to 86 special species including: Nile crocodile, hippo, cheetah, spotted hyena, blue wildebeest, jackal, giraffe, zebra, waterbuck, nyala, eland, kudu, impala, duiker, suni, reedbuck, warthog, bushpig, mongoose, baboons, monkeys, a variery of tortoises, terrapins, snakes and lizards. It is one of the world’s top spots for viewing nyala. The park is a prime birding destination and is home to 340 species. The Hluhluwe River Flood Plain is one of the only areas in South Africa where the Yellow-throated, Pink-throated and Orange-throated Longclaw can be found together. Bird life includes Night Heron, Wood Stork, Wahlberg’s Eagle, Shelley’s Fancolin, black-bellied Korhan, Temminck’s courser, Klaas’s Cuckoo, Little Bee-eater and Crested Barbet. The park has a diverse floral community.

|Pits can still be seen that the Zulu Kings used for capturing animals|Throughout the park there are many signs of Stone Age settlements|The park originally comprised 3 separate reserves that were amalgamated under the title of Hluhluwe iMfolozi in 1989|President Nelson Mandela visited the then Hluhluwe Game Reserve to celebrate the park’s centenary.|In 1981, the Natal Parks board attempted to reintroduce Africa wild dogs into the park. 23 dogs were released in the reserve, most of which had been bred in zoos. However, this met with limited success and since then the population has fluctuated between 3 and 30.|The first visitor camp was built at Hilltop in 1934. The reserve has a 300 km road network. There is a 40 seater boat on Hluhluwe Dam which takes visitors on guided trips twice a day provided the water level is high enough.

(3.5 hours from airport to the lodge – allow time to stop for animals in park)