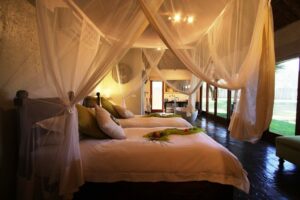 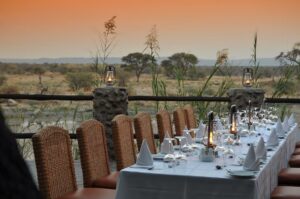 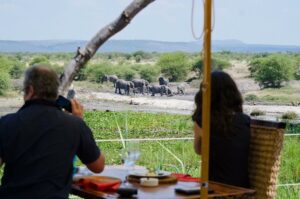 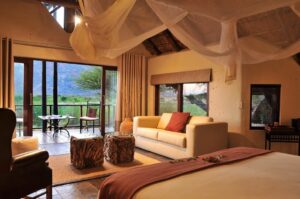 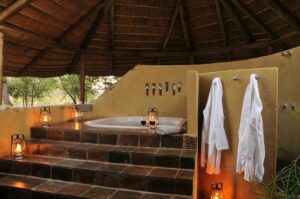 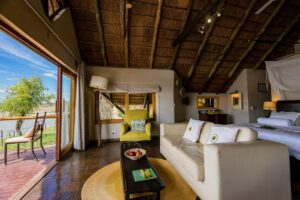 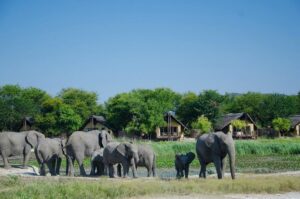 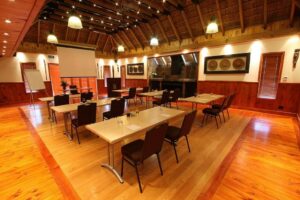 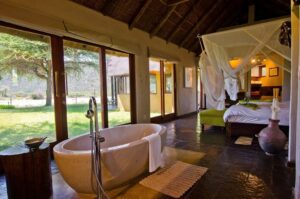 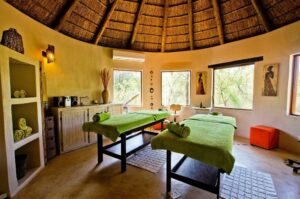 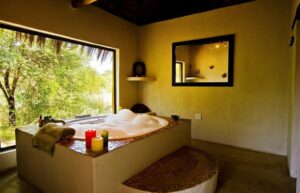 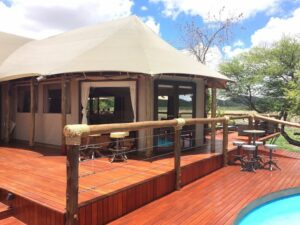 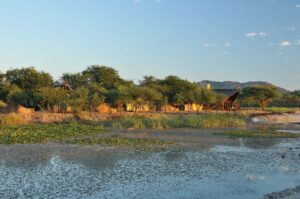 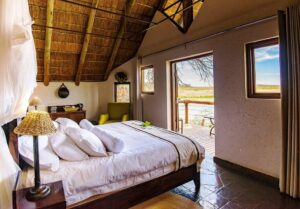 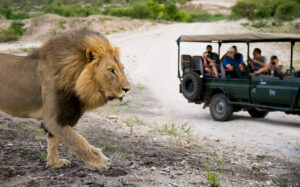 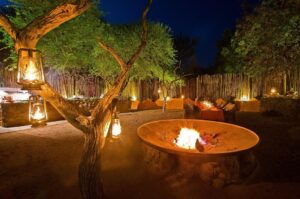 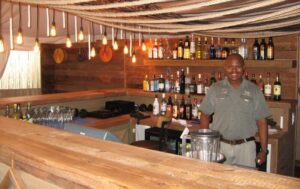 On the far northern border of South Africa lies a beautiful area known as the Great Marico and it is in this spectacular setting, in the malaria free Madikwe Game Reserve, that Tau Game Lodge South Africa is situated.

This luxury safari lodge was designed to reflect the natural surroundings and makes use of the natural resources wherever possible. Privately-owned Tau Game Lodge was built in 1995 and overlooks a vast natural waterhole, which attracts a variety of game, as does the diverse vegetation which thrives in the fertile topsoil.

The decor and furnishings of Tau Game Lodge are Africa-inspired and the rooms are equipped with both air-conditioning and ceiling fans. The rustic thatched chalets are spread out in U-formation on either side of the lodge, offering excellent views of animals approaching the water from the opposite bank. Each chalet has its own wooden game viewing deck, which allows one to experience the bush in privacy and is equipped with an en-suite bathroom and open-air shower.

Guests can create their own spa experience with our treatment options or they can choose from our specially designed Spa Package options. Guests are encouraged to stay after their treatments to enjoy some peaceful time at our secluded relaxation Sala. The Bush Spa also offers wonderful gifts to spoil yourself or a loved one with a memory of your experience.

Ten thousand animals of 27 major species, including wild dog, cheetah, lion, white and black rhino, buffalo and elephant, were re-introduced to the Madikwe Game Reserve over a six year period with animals coming from various reserves and breeding centres. Game viewing is now at its prime.

Children aged 0-2 years sharing with parents stay free and baby-sitting services are on offer at an extra charge.

Children aged 3 to 5 years automatically become members of the Tau Cubz Club, a children’s programme which is great fun and works best over school holidays,. It includes a short game drive after breakfast just for the kids. After their game drive, children are entertained with treasure hunts and arts and crafts activities. The children are provided with their own Cubz Club backpacks, which are filled with a wildlife activity booklet, which includes an animal sticker checklist, a deputy ranger sticker badge and certificate, (which is signed off by their personal ranger) as well as a special Tau T-shirt.

The Cubz Club is especially welcomed by families visiting during school holidays, providing parents the opportunity to enjoy some adult safari time, knowing the kids are well taken care of as well as stimulated and entertained. The bush is the ideal environment in which families can share relaxation time together, provided they are disciplined and respect the rules of the bush. Tau is discreetly electrically fenced around the living area for added safety. A playroom is also reserved for children’s arts and crafts and other supervised activities. The chef offers additional child-friendly food to complement the adult meals, including plenty of fresh fruit and vegetables.

Children between 6 and 11 years old can join the adult safaris, they will however also be issued with a special Cubz Club activity booklet and are welcome to join their siblings during the Cubz club activities.

Enjoy the South African wildlife and the tranquility of nature right on your doorstep while staying in our comfortable and luxury accommodation.

Additional Faciities and developments at Tau Game Lodge following a devastating fire in 2017:|All facilities are back in place, The lodge has a main lodge overlooking the natural waterhole situated in beautiful lush gardens. The main lodge comprises of a hospitable welcome reception area, a courtyard to link reception to the Restaurant & lounge and a cosy bar which services the pool area as well as the outside seating decks around the main lodge. In addition, the lodge now also has a second infinty pool, which is situated next to the recently erected safari viewing lounge.

The more spacious Deluxe chalets with comfortable seating areas, can accommodate parents and children wishing to share the same room. The sliding doors allow for spectacular views of the breathtakingly beautiful tranquillity of the rugged surroundings of the Madikwe Game Reserve.

HISTORY OF THE MADIKWE GAME RESERVE

The Madikwe Game Reserve was proclaimed in August 1991, but officially became the estate of the North-West Parks Board on the 31 October 1991.